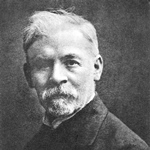 Translated from Yiddish by Jane Peppler

The original Yiddish version of this story, “Go Eat Kreplach,” was published in Sholem Aleichem’s Di Yudishe folks-bibliothek: A bukh fir literatur, kritik, un vissenshaft (The Jewish Popular Library: A Book of Literature, Criticism, and Scholarship), which was published in 1888 and is available online at https://archive.org/details/nybc202379. This book is in the public domain.

Jacob Dinezon (the author) (1851?-1919) was a leading figure in 19th-century Eastern European Jewish literary circles. He was a successful novelist, friend and mentor to many of the renowned authors of his day, including Sholem Aleichem and I. L. Peretz, and a staunch advocate for Yiddish as a literary language. During the First World War, Dinezon turned his attention to social welfare work by helping to found an orphanage and school for children. His debut novel, The Dark Young Man, published in 1877, is considered the first Jewish realistic romance and the first bestselling novel in Yiddish.

Jane Peppler (the translator) graduated from Yale University with a degree in Russian language and literature. In addition to translating Yiddish stories by Sholem Aleichem, Ayzik Meyer Dik, and Mendele Moykher Sforim, Jane has completed English translations of three Jacob Dinezon novels, Yosele, Alter, and Hershele. An accomplished singer and musician, Jane has performed and recorded several albums of Yiddish songs, including “I Can’t Complain (But Sometimes I Still Do),” and “Cabaret Warsaw: Yiddish and Polish Hits of the 1920s-1930s.” She is a past grand champion of Der Yidisher Idol performance competition in Mexico City. Learn more about her books and music at JanePeppler.com.

Scott Hilton Davis (the Managing Editor of the Jacob Dinezon Project), for the past fifteen years, has been working to restore the beloved Yiddish author Jacob Dinezon to his rightful place in 19th-century Jewish literature. In February 2019, Jewish Storyteller Press released the first English translation of Dinezon’s blockbuster debut novel The Dark Young Man in honor of Dinezon’s 100th yortsayt. (Learn more at www.jacobdinezon.com)