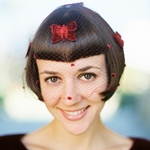 E.C. Messer lives by the Pacific Ocean with her husband and four cats, one of whom has a bionic heart. Follow her on Instagram and Twitter @ecmesser. She would like very much to know you.