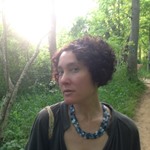 Emily Alice Katz’s short fiction has appeared or is forthcoming in Meridian, Lilith, storySouth, Confrontation, The South Carolina Review, and Flyway, among other publications, and has been recognized by Glimmer Train. Her short story collection, The Book of Nut and Other Stories, was designated a finalist for the 2019 Eludia Award. As vocalist for Manifesto Klezmer Band, she has set the poetry of Yiddish poet Anna Margolin to music, as well as crafted new translations of Margolin's work. She earned a PhD in modern Jewish studies from the Jewish Theological Seminary in 2008 and is the author of Bringing Zion Home: Israel in American Jewish Culture, 1948-1967 (SUNY Press, 2015). She lives in Durham, North Carolina, with her husband and two children. You can read more about her at https://emilyalicekatz.com/