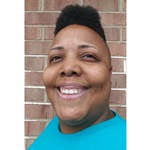 Shawn C. Harris is an author from Richmond, Virginia. Before beginning her debut novel, Persephone, she wrote, developed and produced plays for New York City's indie theatre scene. A passionate advocate for improving diversity in theatre, her plays consistently featured meaty roles for women, people of color, and LGBT people. In 2010, she founded Crossroads Theatre Project to create theatrical works that challenge assumptions about stories by and about people of African descent. When she’s not toiling away on her current work in progress, Shawn is an avid moviegoer and tabletop role-playing game enthusiast.