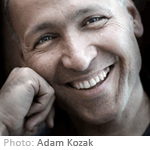 “Welcome home, son,” I whispered in your ear.

Yossi Avni-Levy was born in Israel in 1962, first son to parents who immigrated to Israel from Afghanistan and Iran. He studied Middle Eastern history and law at the Hebrew University of Jerusalem, and joined Israeli diplomatic service. Published four novels, two collections of short stories and novellas and one children’s book. He is one of Israel’s most successful gay writers; in a unique and a colorful language he describes family relations in the traditional Jewish Sephardi environment, as well as international experiences and father-son relationships. Snails in the Rain, a film based on one of his short stories, was released in 2013, and his novel A Man Without Shadow is now being made into a feature film. Avni-Levy received the Prime Minister's Prize in 2007.