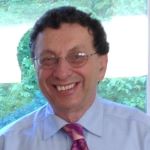 Saul Golubcow writes from Potomac, Maryland and has published essays, reviews, and stories in various Jewish forums. He was born in a displaced persons camp in Germany and grew up in New Jersey. He attended Rutgers University as an undergraduate and earned a Ph.D. in English Literature from SUNY-Stony Brook. His story “Table Talk” was almost fifty years in the making, drafted when he was a graduate student, put aside in a desk drawer as he dedicated himself to family and career interests, and retrieved and reworked after his retirement.