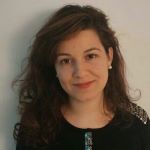 Noa Shakargy (the author) is a poet, editor, and researcher. Her first poetry book, Heat Signature, was published in 2017 and won a few prizes, including the Minister of Culture Award for Young Poets. She is a PhD candidate in the Department of Communication and Journalism at Hebrew University and a co-founder of the College of Literary Arts, a two-year post-secondary creative writing program in Jerusalem. She has co-edited the poetry anthologies: Applause (Poetry Place, 2013) for protest poetry, Close to God (Yedioth Books, 2011), a selection of prayer-poems, and The Street's Word of Honor Reading Ronny Someck's Poetry.