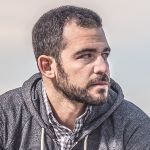 Jeffrey Wolf was a finalist for the 2020 Third Coast Fiction Prize. He has an MFA from Southern Illinois University-Carbondale, where he was also the recipient of a Graduate Fellowship. He currently lives in Chicago, where he teaches English at Columbia College.