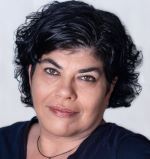 Tears glinted in her own.

Vered Singer (the author) is an Israeli writer and editor. She was born in 1969 in Petach Tikva, and currently resides in Tel Aviv. In the army she served as a military reporter for the newspaper Bamchane. For a decade she held a variety of editing and writing roles in the print press. She studied language editing at Beit Berl College and is currently an independent literary and linguistic editor. Her stories have been published in Israeli newspapers and magazines such as Haaretz, Iton 77, Mozenayim, and Maaboret – Short Story Project. Her debut novel, Bound, was published in November 2018 by Kinneret-Zmora-Dvir publishing house. These days she is writing her second novel.