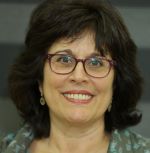 Nora Houri-Haim (the author) was born in 1953 in the “new, old” city of Tel Aviv, to parents who’d made aliyah from Iraq. She spent her childhood surrounded by her huge extended family and grew up on the knees of her aunts and uncles, listening to stories from the “old country.” These stories were in sharp contrast to the reality around Nora. In the fledgling state of Israel, anything foreign, and especially anything connected to the Arab world, was frowned upon. This dissonance defined Nora’s childhood and inspired her writing as an adult. She finished her schooling in Tel Aviv, and then served in the Israeli military as an educational adviser. After completing her BA, Nora got married, had four kids and spent eight years teaching 6-8th graders. Nora completed her MA, with honors in Literature and Creative Writing from Ben Gurion University in the Negev. While there, she began writing her first novel, Cover Me With My Izar, which includes the short story “Serah”. The novel was nominated by her publisher for the Sapir Prize for debut novels and was praised by the National Library during the year it was published.