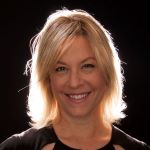 Even then, the girl remained still and silent.

Sagit Emet is an Israeli author, playwright, and writing workshop facilitator. Winner of the Zeev Prize and the Leah Goldberg Prize for children’s literature for her novel Gaya’s Dawn (Keter, 1999). Emet is also the author of the adult novel Days to See (Yediot Books), winner of the Golden Book award for 2017. Her short story "Two" was selected as one of the finalists in the Boston Review’s literature Allies contest in 2019.