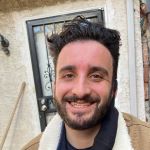 The award ceremony was long and drawn out. Fans were enchanted by the moment. The stadium lights had turned on, brightly centered on the podium. Akiva nursed his shoulder on ice. Victor offered words of praise about his opponent’s courage. A microphone was thrust in Akiva’s face. He shifted to look at his club box, which was filled with strangers. Suddenly he had no desire to be there. His father was home, fighting for their country. This was Victor’s moment. His time would come soon enough. He looked out at the tangerine orange sky, the sun descending out of view. He had to leave now or he’d be late for Kabbalat Shabbat.

Ezra Solway writes in Philadelphia where he's an MFA candidate in fiction at Temple University. After high school, he spent a year of service in Akko, Israel teaching English at an after school program. He started writing in college, as a means to cope with the world. He subscribes to the importance of failure and the process of honest discovery. When the sun is out he enjoys hiking and playing tennis. His work has been published by Flash Fiction Magazine, Eunoia Review and Jersey Devil Press. His website: www.ezrasolway.com