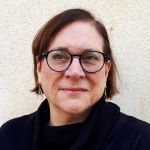 Miriam Kresh writes about day-to-day Israeli life, culinary culture, and the ecology in the Middle East. She has lived in the United States, Brazil, and Venezuela and currently lives in Israel. Miriam speaks four languages and sometimes finds herself explaining something in all four at once. You can reach Miriam at miriamkresh1@gmail.com.