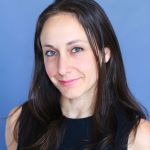 I nod. She walks out and I feel a chill, alone again. The baby kicks. I place my hands on my belly, thinking life is about change, and how we never see it coming.

Amanda Miller is a New York-based writer, actor, and Jewish educator. Her writing has appeared in The Rumpus, Freerange Nonfiction, Cratelit, So Long: Short Memoirs of Loss and Remembrance, and more. In 2013 her memoir, One Breath, Then Another, was published on Lucid River Press. Amanda has performed her solo plays The Jew in the Ashram and How To Suffer Better nationally and internationally at a variety of venues including the Edinburgh and Edmonton Fringes and Brandeis Collegiate Institute. She earned an MFA in Creative Writing from The New School and a BFA in Acting from NYU. www.thejewintheashram.com