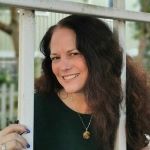 Maureen Sherbondy’s most recent poetry book is Dancing with Dali. Her first YA novel, Lucky Brilliant, was published in March, 2020. Her work has appeared in European Judaism, Litro, The Stone Canoe, and many other journals. She teaches English at Alamance Community College in North Carolina. Maureen lives in Durham, North Carolina. Website: www.maureensherbondy.com