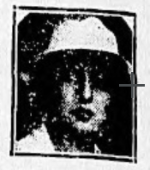 Translated from Yiddish by Jessica Kirzane

It had been five years since I’d seen my friend Sasha. When I left him in Paris he was happy, in love, and had a brand new law diploma. For two years I received no letter from him and didn’t hear anything about him. So when I met him five years later in a New York café, I hardly even recognized him.

I could scarcely believe that this was the same handsome, healthy Sasha who could sleep for twelve or fourteen hours at a time even if heaven and earth upended outside, or who could jump out of bed in a minute and his eyes would be bright and fresh like flowers washed by the dew. At first glance, I suspected he might have taken to drinking or, worse, perhaps opium. Sasha’s dirty blonde hair stuck out here and there, his teeth were stained from smoking, and the worn-out edges of his collar stuck up on either side of his necktie.

Without giving it a thought, I answered, “What’s true is the truth, and what’s not is a lie.”

Stunned to silence, I eyed him with fear. I tried to drag him from the café but I couldn’t. We stood hidden in the café’s darkness.

“No, Jacob,” he sighed, “Often what’s truest in man’s inner fantasy is a lie to the simple, logical mind. Nothing but a lie. And what once seems a lie before a man’s very eyes and mind can be the most beautiful truth to his innermost self. Do you understand me, Jacob?”

I shuddered, thinking: When a man begins to philosophize about lies and truth, you know something terrible has happened to him. Imagine, Sasha a philosopher!

As we went outside, I asked, “What happened, Sasha?”

He could hardly contain himself as I asked the question. He wanted to say something, but the words stuck in his throat. He coughed to cover a quiet cry and wiped his tears.

I turned away, watching the busy crowds around us. A summer sun warmed us from above like a bright oven. On the sidewalk a browned Italian played an accordion, a girl with a floral scarf on her head threw a coin into a drum full of pennies. Nearby, a dozen girls with crooked shoes and cartoonish skirts danced prettily. I thought to myself, as I regarded Sasha: Dance, children, while you’re still young and you don’t have to hide your hearts’ cry with a cough so people won’t know…

We ambled toward the water. We saw a ship that was heading along the Hudson and we got on to escape the heat and activity. Sasha saw that I was waiting with sharp curiosity, despite my patience. Looking out at the water, he spoke as if to far away. “As you know, three years ago I was married. Here’s what happened: I got tired of Paris life, of hearing about intrigues and carrying them on myself, and all the wonderful night life. I went back to my home town to see my parents. That’s where I met the beautiful, innocent Leah. I only saw her as a little girl with golden braids, and I was nothing but a grown up lad. Because she was so quiet and pretty, she already seemed more like a woman than a girl. In short, I fell in love with her, won her trust and love, and we were married. I called her Laura, firstly because I liked the name and secondly because it suited her: blonde, loyal, and womanly.

“My Laura was beautiful, innocent, true – but she was provincial and uninteresting. She loved like a Jewish woman loves, with devotion and respect. I suffered, and she didn’t understand why.

“I took it upon myself to develop her, bit by bit. I wanted love to be her cult, and me her idol. I gave her romantic novels to read, I carried on a constant conversation about love – unhealthy and primitive love, unrefined and excessive. I knew that from inside that quiet blonde woman something wonderful would burst out. All I had to do was awaken it and bring it to life. I destroyed everything in her about the morality of love.

“Shortly after our wedding we left my small town and settled in Paris. Parisian fashion, Parisian chic, and those Jewish brown eyes – ah, what a beauty my Laura was! Up till now everything has gone like a children’s story, only joy after joy. The husband rich, the wife beautiful, and Paris… In short, up to this point it was ideal, but then it all went to the gutter.

“One afternoon I met my friend, an artist. We were old rivals, and when he saw me he decided to take my joy home with him and tear it apart. I was so certain of my Laura. I was sure she loved only me, the man she married. For all the glitter of Paris, she remained the pious and modest Leah.”

Sasha grew quiet for a while and I felt that he was coming to the anticipated point. I smoked and didn’t hurry him along, and rolled him a cigarette. He continued, “Though I didn’t run into him again, he started visiting my home. I didn’t want to show him my displeasure. Laura was friendly, outgoing, but with tact. In short, I don’t want to bore you with the details. They fell in love. They didn’t try to fool me. My Laura told me everything, begged my forgiveness as though I was dead, cried like all the women in the novels – she has to run off with him, she can’t live without him. She wants to be true to me, she wants to be loyal, but she can’t. I’ll find someone better, she’s not worthy of me. She didn’t forget to mention how she had suffered this short while, how she’s still suffering now, how she tried to tear herself away from him. In a word, she and he… And I was nothing more than – it should never happen to you – the man that you have to beg forgiveness from so he won’t come back to haunt you in your dreams. You know how woman are! Or maybe you don’t know? I was shocked, upset, like I’d been punched in the gut, and still I had to dance along in this pathetic goodbye waltz. I had to be the noble man in the modern romance. I couldn’t stay in my house without my Laura, so I left everything behind.

I found myself an attic apartment and settled into my exile. I lived like a fool, hoping that after the first taste of it Laura would come back to me. I was the one who had developed her, taught her to love so well, and she wanted to give that powerful love to my friend the charlatan! Do you see now, Jacob, my friend, how good I once had it?

“I made myself sick over her, as much as I could and however I could. She invited me to come to her house and to be her friend, but I didn’t go and wouldn’t be her friend. She wanted me to keep on wearing elegant clothes and go on with my work, but I stopped working and let myself go. She wanted to come to my room and clean it and keep my things in order, but I wouldn’t let her.

“I fell so low that I wanted to force her to come back to me out of pity. But she didn’t come, and you can see how much I suffered.”

He stopped talking and, seeing my impatience, he threw his cigarette butt into the water and lit another.

“But I had my revenge!” he gloated with an angry smile. I was afraid, and prepared myself to hear the worst.

“You know, deep in my heart I believed that she would someday long for her Sasha.  You can’t easily forget all that we had together!”

Sasha became animated. A fire lit his slate grey eyes like blue lanterns. He continued his tale. “It happened one night at the start of summer. She told me she was coming. I tidied my room as best I could. I even brought in flowers for the occasion. My room was a web of flowers.

“She arrived. She was pretty as a queen, dressed in silk. But sadness peeked out from her eyes. I stood there, cold and distant, and spoke with erudition about elevated matters. I felt like I was her god again. I understood that she had come to beg me to take her back. I knew what I had to do, and I felt peaceful.

“She began to stroke my hand, my brow. She kissed my head and fell upon my neck. I let her kiss me and pet me, but did nothing in return. I didn’t move. I wanted to see her at my feet, begging me. She knew it, she felt it. She showed me her love with astonishing, devilish, wild passion, more even than Lilith and her horde of demons would be capable of!

“I held her in my arms, my former wife. She told me that she hates that man, that he treated her badly. He even hit her. When I was finally sure that she was ready to be my wife again, I pushed her away from me and spat in her face. She begged me, “My good Shasha, my beloved Sasha, you’re the only one I love! Take me back!” I spat on her again. She let me spit on her, only kissing me with more passion, with more love, and begging that I take her back. I ripped off her blouse and spat on her naked body!”

“You shudder to hear it, but it’s worse for me to tell it,” he said, watching me. He lowered his head to the railing of the ship and I heard him sobbing.

“Sasha, what’s wrong with you?”

“Don’t you understand that it was all a lie? It was a lie I dreamed – I made it up and wished it so! It was a lie that I raised in my own mind and fed with my own blood and marrow. I labored on that lie for two whole years until it became a truth, my own truth.”

“No, it was all true until that night. She never came to me to beg me and I didn’t spit on her or push her away. But that is still my truth. Do you understand?”

The ship returned to the shore. Sasha and I disembarked. It had become night and we walked toward the cafés. We ate in silence and sorrow. Late at night I brought Sasha to my home like you’d bring someone to the hospital, and his truth became my truth.
Copyright © Jessica Kirzane 2021
From the collection Modne Mentshn (Strange People), New York, 1918

Rachel Luria (the author) (1882-1927) was a Yiddish short story writer and a member of the staff of the Jewish Morning Journal. Born in Worzhan, Lithuania, she came to the United States at the age of twelve. She worked in clothing shops and as a nurse, in addition to her writing. Luria has received very little critical attention, though Yiddish literature scholar Mikhail Krutikov has called her “one of the most original (and completely forgotten)” New York Yiddish writers.

Jessica Kirzane (the translator) is the assistant instructional professor of Yiddish at the University of Chicago and the editor-in-chief of In geveb: A Journal of Yiddish Studies (www.ingeveb.org). She is the translator of Miriam Karpilove's Diary of a Lonely Girl, or the Battle Against Free Love (Syracuse University Press, 2020).