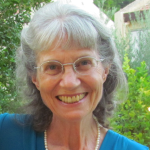 Oh, Ben, I wanted to say, and longed to lean my head against his shoulder because the world around me had begun to spin. But I stood next to him quietly at the top of the hill and waited for the sensation to pass.

Susan Susser has taught English at Beit Berl Academic College in Israel for over thirty years. She has an M.A. in French Literature from Queens College in New York and is a graduate of the creative writing program at Bar Ilan University. Her fiction and non-fiction have been published in Bridges: A Jewish Feminist Journal, Kaleidoscope, Tel Aviv Short Stories, Jewish Currents, Jewish Literary Journal, and Collages & Bricolages.