Mallory and the Hologram 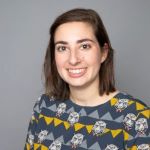 Mallory and the Hologram

Brooke Randel is a writer and copywriter in Chicago. Her writing has been nominated for a Pushcart Prize and published in Fearsome Critters, Gigantic Sequins, LandLocked Magazine, The Nasiona, SmokeLong Quarterly and Two Cities Review. She is currently writing a memoir about her grandma, literacy, and the legacy of the Holocaust.