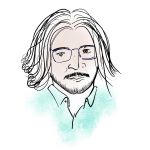 Ben Kaufman (a pseudonym) is a Chicago-based writer and multimedia storyteller. He is most interested in stories that upset the mundane and force characters to confront their own shortcomings. Kaufman draws upon his own background as a dual-citizen of Israel and the U.S. to tell intimate stories that connect family history to personal experience.