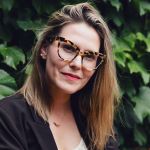 Talya Jankovits’ work has appeared in a number of literary journals. Her micro piece, “Bus Stop in Morning” is a winner of one of Beyond Words Magazine’s 250-word challenges. Her short story “Undone” in Lunch Ticket was nominated for a Pushcart prize. Her poem, “A Woman of Valor,” was featured in the 2019/2020 Eshet Hayil exhibit at Hebrew Union College Los Angeles. She holds an MFA in Creative Writing from Antioch University and resides in Chicago with her husband and four daughters.