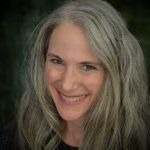 Gail Pasternack is passionate about wisdom stories that spark laughter, insight and a fresh perspective. Gail’s story, “Asmodai in Portland,” was published by Reclaiming Judaism Press in the New Mitzvah Stories for the Whole Family anthology. In March 2021, her travel essay about cocktail bars in London and Paris was published in Wanderlust Journal. Devoted to helping writers, Gail has served on the Willamette Writers Board of Directors since 2015 and as president since 2019. She holds a bachelor’s degree from Cornell University, a masters from Columbia University, and is an ordained Maggidah. Gail and her husband reside in Portland, Oregon.