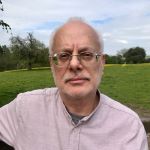 Robert Brynin is the Director of The Doctor Richard Mackarness Foundation, and the author of Our National Health, Are We Taking the Right Medicine? His fiction writing ranges from Jewish historical to non-Jewish humour to anything that interests him, which is a lot. He identifies strongly as Jewish and Zionist, but lives quietly on a farm in rural Herefordshire, many miles from any Jewish community. He has three Charedi children, one in England and two in Israel. He is past retirement age but far too busy to retire.