The Ghost in the Desk 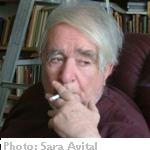 The Ghost in the Desk

Translated from Hebrew by Evan Fallenberg

Ladies and gentlemen, dear readers, believe it or not, a ghost set its sights on my writing desk. Even now, with the affair behind me, my hand still trembles as I write such a sentence. If it is thus now, the ghost no longer present, imagine how awful my situation was when it was still cohabitating with me. A holy fright.