I Am My Beloveds 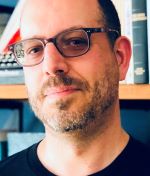 I Am My Beloveds

Jonathan Papernick, born and raised in Toronto, is the author of two short story collections and three novels. He serves as Senior Writer-in-Residence in the Writing, Literature and Publishing department at Emerson College in Boston where he has taught since 2007. The excerpt here is taken from his forthcoming novel, I Am My Beloveds, which will be published next month.