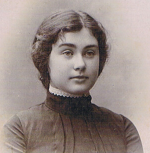 Translated from Yiddish by Daniel Kennedy

Anna Margolin (the author) (1887–1952). Pen name of Roza Lebensboym. Born in Brisk (modern day Belarus) in the Russian Empire, Margolin moved to New York in 1906 where she worked as an editor and journalist for various Yiddish-language newspapers. Despite only publishing one full-length collection during her lifetime (Lider, 1929), Anna Margolin remains one of the most enduringly acclaimed poets in the Yiddish language. Margolin’s poetry is dark, sensual and transgressive and these characteristics can also be found in her short stories which, because they were never collected in book form and were published under a variety of pseudonyms, remain unknown even to readers of Yiddish.

Daniel Kennedy  (the translator) is a translator and co-founder of Farlag Press.  His translations from the Yiddish include Warsaw Stories and A Cheerful Soul and Other Stories by Hersh Dovid Nomberg, and A Death: Notes of a Suicide  by Zalman Shneour, both of which came out of the Yiddish Book Center’s Translation Fellowship.