The Passing of Passover 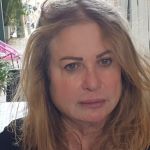 The Passing of Passover

Chaim didn’t answer. I could hear the tearful, breathy, little sobs that marked the end of his every breath. I think it was during that particular Passover that everything changed.

Copyright © Varda Hurvitz 2022
This excerpt is from Mamma's Bible, published in Hebrew in 2016 by Yediot Sfarim.

Varda Hurvitz (the author) immigrated to Israel with her parents when she was only five months old. She published stories in newspaper supplements for youth and was awarded the Bialik Prize for Children when she was in grade four. She is the author of bestselling books about romantic travel and the novel Mamma's Bible (published by Yediot Books Publishing). Hurvitz is a veteran journalist. She has published wide-ranging interviews and magazine articles in Israel’s largest daily newspaper Yedioth Ahronot and in the women’s magazine Laisha. Around six years ago she left journalism to devote herself to her novel writing.