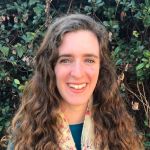 “Avi,” he returned. And he opened the book to the next page.

Danielle Resh’s poetry has been published in the Jewish Literary Journal, the Sunlight Press, Hevria Magazine, Poetica, and is forthcoming in Valiant Scribe. “Soles and Souls” is excerpted from her unpublished historical fiction manuscript, “The Miracle of Kryshenshok,” about a shtetl community in nineteenth century Poland that discovers its Torah is miraculously growing. The manuscript was the winning historical fiction manuscript of the Writers’ League of Texas’ 2020 Manuscript Contest, as well as a finalist in the science fiction/fantasy category. Danielle is currently seeking a publisher for it. You can find out more about her writing at danielleresh.com.