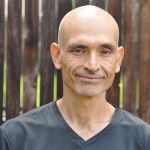 Perhaps that was the sign, along with the lost book. That’s what he’s been thinking, especially since last night when he saw the lion. Maybe that was exactly it. He had to start writing his first story. All by himself.

English translation copyright © Barak Hamdani
“Yellow People” is an excerpt from the novel Yellow Rose, originally published in Hebrew (as Vered Tzahov) in 2012 by Kinneret Zmora-Bitan.

Barak Hamdani was born and raised in Israel. As an avid reader he was always intrigued by the development of the characters and the story plots in novels. So much so that he decided to tip his hand into the art of creating literature. He first published a poetry book called Bodily Confinement in 2003. He then went on to publish his first novel, Dust, in 2006 with Keter Publications. His second novel, Yellow Rose, that handles the delicate balance between satire and sorrow in the WW II, came out in 2013 with Zmora Bitan Publications. Barak currently lives with his wife and two kids in Denver, Colorado.