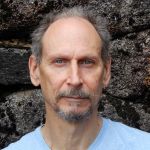 And I whispered aloud: “One life – there are no second chances.”

Copyright © Richard Zimler 2022
This excerpt is from the novel, The Incandescent Threads, which will be published in English in the UK on July 4, and in the US in October, by Parthian Books. You can pre-order the book directly from the Parthian website at https://www.parthianbooks.com/collections/recommended-fiction/products/the-incandescent-threads-hardback.
The Incandescent Threads explores the lives of Benni and Shelly Zarco, courageous cousins who are the only survivors of the Holocaust in their family and who owe their lives, at least in part, to a tradition of sacrifice begun by a mystical sixteenth-century ancestor.

Richard Zimler’s novels have been translated into 23 languages and have appeared on bestseller lists in 12 countries. His new novel, The Incandescent Threads, will be published in the summer of 2022 by Parthian Books. The Incandescent Threads has already been published in Portuguese and was named one of the Books of the Year by the two major bookstore chains in Portugal, where Richard has lived since 1990. It was also a Number 1 bestseller there. Richard’s previous novels include The Last Kabbalist of Lisbon, Hunting Midnight, Guardian of the Dawn, The Seventh Gate and The Lost Gospel of Lazarus. His website is: www.zimler.com