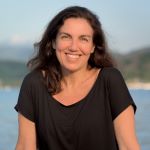 Translated from Portuguese by Claudio Bethencourt

I never dared to think of having relatives linked to the Nazi past. That may have been out of fear. Hearing my grandmother Gretl say that my grandfather was just a Nazi official who simply followed orders had not made me dive into the issue. But now that I stand before Frida, the “official” carries different weight and meaning. I am now side by side with my great-grandmother who lived and experienced the horrors of that war. Here lies my past.

Luize Valente is a Brazilian Portuguese writer, screenwriter, and broadcast journalist. Her books published in Portuguese include: Israel Routes & Roots (1999), The Secret of the Shrine(2012),A Square in Antwerp (2015), Sonata in Auschwitz (2017), and Do tempo em que voyeur precisava de binóculos (2019; no title in English). Her documentaries include: Paths of Memory: The Trajectory of the Jews in Portugal (2002) and The Star Hidden in the Backlands (2005), exhibited in more than 15 national and international film festivals. All her works deal with cultural and historical Jewish issues, such as the Inquisition, World War II, and refugees. Her books have been published in Brazil, Portugal, France, Italy and Poland. www.luizevalente.com