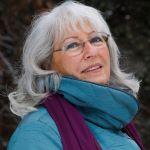 This excerpt is from the forthcoming novel, Don't Ask, which will be published in April and can be pre-ordered or purchased here.
Copyright © Gina Roitman 2022

Gina Roitman, living in Quebec’s Lower Laurentians, works remotely as a memoir-writing coach. The excerpt published here is from her first novel, Don’t Ask, which will be published soon by Guernica. Roitman is also the author of the short story collection, Tell Me a Story, Tell Me the Truth; the co-author of Midway to China and Beyond; and the subject of the award-winning documentary My Mother, the Nazi Midwife and Me. Her work has appeared in numerous anthologies and magazines including Poetica, Wherever I Find Myself, Moment, the Forward, and carte-blanche. She is currently editing an anthology featuring the essays and stories of 14 daughters of Holocaust survivors.