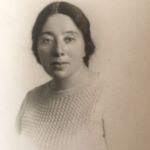 This excerpt is from the book, Dineh, to be published on March 1, 2022 by White Goat Press. The original book, Dineh: oytobiografishe dertseylung (Dineh: An Autobiographical Novel), was published in Yiddish in 1970 in Montreal. The forthcoming book in English has been selected as a 2022 Great Jewish Books Club selection and can be purchased here.
Translation copyright © Yermiyahu Ahron Taub 2022

Ida Maze (the author) (1893-1962; pronounced MAA-zeh; also rendered as Maza and Massey) was an important figure in the world of Yiddish literature. After emigrating from White Russia, she lived briefly in New York City and then settled in Montreal. In addition to Dineh she wrote four books of poetry: A mame (A Mother, 1931), Lider far kinder (Poems for Children, 1936), Naye lider (New Poems, 1941), and Vaksn mayne kinderlekh: muter un kinder-lider (My Children Grow: Mother and Children’s Poems, 1954), which was awarded the prize in children’s literature by the Congress for Jewish Culture in 1955.

Yermiyahu Ahron Taub (the translator) is a poet, writer, and Yiddish translator. He is the author of six books of poetry, including A moyz tsvishn vakldike volkn-kratsers: geklibene Yidishe lider (A Mouse Among Tottering Skyscrapers: Selected Yiddish Poems, 2017) and two works of fiction, including Beloved Comrades: a Novel in Stories (2020). His previous translation from the Yiddish was May God Avenge Their Blood: A Holocaust Memoir Triptych by Rachmil Bryks (2020). Website: yataubdotnet.wordpress.com.