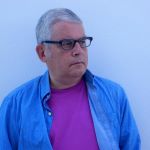 Translated from Greek by Mina Karavanta

I will tell you something that I don’t know how you will take. Something that has been my burden for a long time now. You can call me anything you want. Superficial and erratic, even paranoid, or obsessed. I cannot hide it from you though. I find it impossible.
I ignore what you find out and how you do so. Even we can barely tell the difference between the event and its distortions despite the immediate access we have to facts. What can I say? Maybe sometimes the irrevocable distance, being informed after the event, is more accurate and sober than the information that the immediate experience provides.
To make a long story short. You may have been informed about the dreadful trials and the bitter end of your last love, Dora. Roaming the entire scene of horror of the twentieth century. Nazism, Stalinism, destitution, isolation. Her daughter, Franziska Marianne Lask, lived a hard life just like her mother.
This is the one I want to ponder. To insist on. With insatiable determination.
She may have been the daughter of the German communist Lutz Lask, who lost his life in Siberia, just like many of his kind who fled to the great Soviet fatherland in ’36, but anyone who met Franziska (calling her by her half-name honours your memory) talked about a creature who looked like you, not only in spirit but also in appearance. As if Dora, who had one of your big framed photos on top of her bed, had not got pregnant by the head of the Red Flag, but by the author of the Castle. This girl, who lost her birth father at the age of six, was raised under the weight of your traumatic absence in her mother’s life. She became the child you did not have with her mother. What a difficult father, what a difficult fatherly ghost… On top of having a mother too obstinate and adamant about refusing to appropriate an inch of your posthumous fame in order to alleviate herself and her daughter of the destitution that burdened them. A mixture of communism and Hasidism. An unlikely cocktail! The outcome: the mother dies when she was barely forty years old (August 15, 1952) of kidney failure in a hospital in east London. Unknown and lonely.
Eighteen-year-old Franziska Marianne loses the ground under her feet. Without any flair for the melodramatic: she is deprived of the necessities to bury her mother, your beloved Dora. This afflicted by misfortune creature who suffered all the disasters of European history in the second half of the twentieth century, the daughter you never knew, the daughter who was born outside your orbit, your real daughter, your main inheritor, exhibited signs of schizophrenia. It is said that she heard voices and sounds while experiencing delusional situations. Exactly the same way—and here I am thinking aloud—several protagonists or narrators of yours did. Except that, and you know this first-hand, the fictional characters go in and out of their invented darkness. Whereas Franziska Marianne, despite the efforts of several Jews in London (including your own niece, Marianna Steiner) became alienated from everyone. She disappeared off the face of the earth. She became a beetle, a weasel, a mole, she became a hunger artist. Without return, though. She was brought back to “reality” by the police, who had been notified by her neighbours. It was October 12, 1982 when the police and the locksmith broke into her apartment in Muswell and found her decomposing body in her bed. She had died of starvation at the age of forty-eight.
Enough with the enigmatic Kafkaesque deductions, though.
At any rate, Kafka’s enigma is that there is no enigma. To be precise, an enigma is a state balancing on a tightrope between a condition of hilarity and a zero ground. There might be no tightrope, let alone a rope. And the rope, whether tight or loose, might represent one’s desire to suspend oneself in the lightness of terror.
Anyway. I’ve stretched this too far. Too far. Let’s get to the point.
On Facebook I coordinate a closed, small group that consists of your most dedicated readers. We have called it “Hotel K.” It involves not only academics and researchers. Amongst the members of the group, there are writers, artists, architects, lawyers, students, and bibliophiles who read you systematically, without ideological misconceptions or fixations. Men and women of all ages. Random individuals from across the planet. A network of persistent, and open-minded readers of your work. We exchange news, thoughts, articles, of our own and others’, photographs, and anything else that might concern your world in the passing of time. One day a photographer from Buenos Aires uploaded a photograph of Franziska Marianne at a young age. He was preparing a photo exhibit the theme of which was the women in your life. I had never seen the picture before. There was an online moment of embarrassment. Dead silence. She and I looked alike like two peas in a pod. I don’t want to say how beautiful she was. To be precise, she was a noble mixture of her mother’s gaze and yours. I was paralysed. It took me three months to reconnect with “Hotel K.”
I am certain that, aside from being called stupid, I run the risk of being accused of vanity.
I here enclose her photograph (alas, in poor resolution) and mine at a similar age. You can take a look and draw your own conclusions.
At that moment I wrote a note in my journal: From Mafalda to Franziska…

The translation has been made with the support of the Hellenic Ministry of Culture and Sports / Hellenic Foundation for Culture (HFC) within the framework of the GreekLit Sample Translation Grant Programme.

This excerpt is from the novel The Researcher, originally published in Greek by Patakis Publishers in November 2020 and awarded the prize for best novel by the highly-respected literary magazine O Anagnostis (The Reader). It is the fictional re-telling of the life and work of Franz Kafka, told through the research of a modern female protagonist.

Michel Fais (the author) was born in Northern Greece (Komotini) in 1957 and lives and works in Athens. He has published seven novels, four novellas, one short story collection, two plays, and two photographic albums. He is the editor of the literary supplement of the Efimerida ton Syntakton newspaper and he teaches creative writing at the Greek Open University, the University of Western Macedonia, and the “Sxoli” Creative writing seminars by Patakis Publishers. In 2000 he was awarded the National Short Story Prize. His work has been translated into English, German, French, Spanish, Romanian, Czech and Chinese. His plays have been staged by Roula Paterakis, Thodoris Gkonis, Lilly Meleme, Pericles Choursoglou, and Alexia Kaltsiki. He has co-written screenplays with Nikos Panayiotopoulos and presented his photographs in solo exhibitions. In 2021, Yale University Press (the Margellos World Republic of Letters) published Fais’ Mechanisms of Loss (including the novellas Lady Cortisol and Aegypius Monachus), translated by David Connolly.

Dr. Mina Karavanta (the translator) is Associate Professor of Literary Theory, Cultural Studies and Comparative Literature in the Faculty of English Studies of the School of Philosophy of the National and Kapodistrian University of Athens. She  has published articles in international academic journals such as boundary 2, Feminist Review, Modern Fiction Studies, Mosaic, Symplokē, Journal Of Contemporary Theory, and book chapters in international volumes. She has co-edited Interculturality and Gender, with Joan Anim-Addo & Giovanna Covi (London: Mango Press, 2009) and Edward Said and Jacques Derrida: Reconstellating Humanism and the Global Hybrid, with Nina Morgan (London: Cambridge Scholars Press, 2008). She has translated George Steiner’s Heidegger into Greek (Athens: Patakis, 2009), and Haris Vlavianos’s poetry into English, Affirmation: Selected Poems 1986-2006 (Dublin: Dedalus: 2007). She is the co-editor of Synthesis: An Anglophone Journal of Comparative Literary Studies ( https://ejournals.epublishing.ekt.gr/index.php/synthesis/)