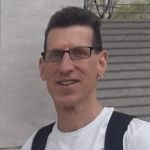 Eric Gabriel Lehman has published novels, short stories, and essays. His work has appeared in the New York Times, Brooklyn Rail, Raritan, and elsewhere. He teaches at Queens College/CUNY in New York, where he lives.