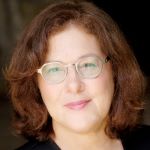 Translated and edited from Hebrew by Maayan Eitan and Emily Hochberg

This story was published in Hebrew in 2019 in the book Language of Sin (שפת החטא) by Kinneret-Zmora-Dvir, in collaboration with the Heksherim Institute for Jewish and Israeli Literature and Culture. Previously, in 2017, this story appeared in Hebrew in Zrif, the magazine of Ben Gurion University’s literature department.

Rachely Dor Rappaport is an Israeli author and literary editor, born in Moshav Herut. Her first short story, “Chronograph,” was a runner-up in the 2010 Haaretz short story competition. Since then, she has published short stories and reviews in Israel’s main literary journals and has taught creative writing and creative biography at colleges, an independent book shop, and art school. Her bilingual (Hebrew/Yiddish) fiction book Language of Sin was published in 2019 and her creative biography books are published at Israel’s largest publication houses and research institutes. She has a Masters in creative writing from Ben Gurion University and is now doing her PhD in literature at Bar-Ilan University.