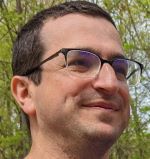 Shmuel Nadata wrote The Greenberg Funeral: Linked Stories while working towards his MFA in Fiction at Johns Hopkins University. The collection then sat unread for nearly twenty years until his mother-in-law suggested he submit something from it to Jewish Fiction .net. He submitted the titular story, and he is glad he did. Shmuel continues to write to this day. He is married with four children and several pets.