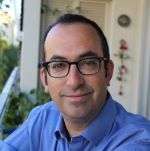 On Shauli’s first day of first grade, I sent a picture of him with his new backpack and happy smile to Rosolio. I couldn’t resist. It was a one-time indiscretion, hasty and careless. I hoped he’d delete the picture and ignore the message, but he responded right away: “Sweet child. Enjoy him, they grow up fast.” For hours, my eyes caressed the words he’d written.

Yishai Sarid (the author) was born in 1965 and raised in Tel Aviv, Israel. He is the son of senior politician and journalist Yossi Sarid. Sarid was recruited to the Israeli army in 1983 and served for five years. He studied law at the Hebrew University of Jerusalem. During 1994–1997, he worked for the Government as an Assistant District Attorney in Tel Aviv, prosecuting criminal cases. Sarid has a Public Administration Master's Degree (MPA) from the Kennedy School of Government at Harvard University (1999). Alongside his legal career, Sarid writes literature, and so far, he has published six novels. His novels have been translated into ten languages and have won literary prizes.

Yardenne Greenspan (the translator) is a writer and Hebrew translator born in Tel Aviv and based in New York. Her translations have been published by Restless Books, St. Martin’s Press, Akashic, Syracuse University, New Vessel Press, Amazon Crossing, and Farrar, Straus & Giroux. Yardenne’s writing and translations have appeared in The New Yorker, Haaretz, Guernica, Literary Hub, Blunderbuss, Apogee, The Massachusetts Review, Asymptote, and Words Without Borders, among other publications. She has an MFA from Columbia University and is a regular contributor to Ploughshares.