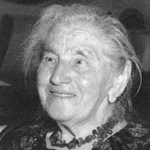 Translated from Yiddish by Faith Jones

Translation copyright © 2022 Faith Jones. Excerpted from the forthcoming Mean to Be and Other Stories by Shira Gorshman, translated by Faith Jones (White Goat Press).

Shira Gorshman (the author) (1906-2001) was born in Krakes, Lithuania. Her childhood years were difficult, and by the age of 14 she was self-supporting, becoming involved in the labour movement and then, with her first husband, moving to Palestine. By the time she was 20 she had three daughters and was working in G'dud ha-Avodah, an idealistic group which performed heavy labour for the emerging Jewish settlement. When this group splintered, Gorshman went with the more radical branch to Crimea, with her children but without her husband. Living on a communal farm in Crimea, she came into contact with official visitors, including the artist Mendel Gorshman. They married and she and her children returned with him to Moscow. Always a storyteller, in Moscow she began to write, publishing in Soviet and Polish Yiddish periodicals and eventually producing story collections and novels. Following her husband's death, she returned to Israel in 1990, energetically producing stories and memoirs until her death in 2001, as well as revising and republishing many of her Soviet-era stories. "The Parasite" was her first published story, appearing in the 1930s.

Faith Jones (the translator) is a librarian, translator, and researcher in Vancouver. Her work focuses on women in Yiddish culture. She is a member of the Digital Yiddish Theatre Project and a co-translator of The Acrobat, a selection of the poetry of Celia Dropkin. Her translations of Shira Gorshman's stories and novellas, Meant to Be and Other Stories, is due out from White Goat Press in late 2022.