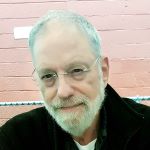 Dr. Peter Alterman retired from the U.S. National Institutes of Health in 2012 and from a biopharmaceutical industry collaborative program six years later. He’s published science fiction, literary fiction, mainstream fiction and literary criticism. A bibliography of his literary work may be found at www.peteralterman.com. He earned a Ph.D. in English Literature from the University of Denver, reads fiction for a literary journal, and serves as its non-fiction editor.