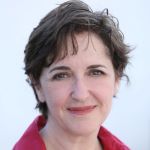 Margie Rynn is an American freelance writer who has been living in France for over 20 years. She is the author of Frommer’s EasyGuide to Paris, and has written for Time Out New York, Budget Travel, and EasyJet Inflight, as well as environmental organizations such as NRDC and the UN Environment Program. In a former New York life, she wrote and performed a one-woman-show about a girl from New Jersey who becomes a Flamenco dancer. This is an excerpt from an unpublished novel.