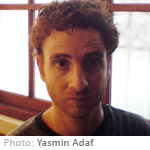 Translated from Hebrew by Margalit Rodgers and Anthony Berris

Sunburnt Faces will be published by PS Publishing.

Shimon Adaf was born in Sderot, Israel, in 1972 to parents of Moroccan origin. He began publishing poetry during his military service. A poet, novelist and musician, Adaf studied in the program for outstanding students at Tel Aviv University, simultaneously writing articles on literature, film and rock music for leading Hebrew newspapers. He was also a founding member of the literary group "ev" whose aim was to find a new poetic interface between classical and modern Hebrew. Adaf worked for several years as literary editor at Keter Publishing House, and has also been writer-in-residence at Iowa University. He was awarded the Ministry of Education Award for his first collection of poetry(1996), the Prime Minister’s Prize (2007 and the Yehuda Amichai Prize for Poetry (2010).