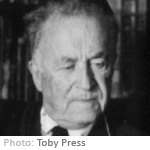 (Excerpt of a Novella)

In 1912, drawn by Germany's lively Jewish cultural life, he left Eretz Israel. While there, he married Esther Marx and the couple had two children. At first, Agnon gave private lessons and worked as an editor. Later, a wealthy Jewish businessman, Zalman Schocken, became his patron and published his works. Agnon read German literature extensively, became a member of a circle of Hebrew writers in Hamburg, and collaborated with Martin Buber on a collection of Chassidic stories. In 1924, fire swept his home and destroyed all his books and manuscripts, including the novel, In the Bond of Life, whose imminent publication had already been announced. He returned to Jerusalem where he lived until his death.

Several of his works were published posthumously by his daughter, Emmuna Yaron. Called "a man of unquestionable genius" and "one of the great storytellers of our time," S.Y. Agnon is among the most effusively-praised and widely-translated Hebrew authors. His unique style and language have influenced later generations of Hebrew authors. In addition to the 1966 Nobel Prize for Literature, Agnon received numerous literary awards, including the Israel Prize on two occasions. In 2007, his work was named among the ten most important in modern Hebrew literature.
Michael P. Kramer (the translator) is director of the Anne Shachter-Smith Memorial Project in Literature and former director of the Shaindy Rudoff Graduate Program in Creative Writing at Bar-Ilan University, Israel. He is the author of Imagining Language in America (Princeton), editor of New Essays on Seize the Day (Cambridge), and co-editor of The Cambridge Companion to Jewish American Literature, Modern Jewish Literatures: Intersections and Boundaries (Pennsylvania), and The Turn Around Religion in America (Ashgate). He is the founding editor of MAGGID: A Journal of Jewish Literature (Toby Press) and co-organizer of Kisufim: The Jerusalem Conference of Jewish Writers. The above excerpt is from his forthcoming translation of S.Y. Agnon's And The Crooked Shall Be Made Straight (Toby Press).