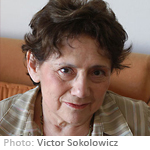 (Excerpts from a Novel)

High school is over. There are farewells, laughter, and tears. All my lies are still intact. I’m a student of unknown origin, with no religion, no important ancestors. I wear a serious, responsible expression, I shine my shoes regularly, I wash my hair with a shampoo whose fragrance I’ll never forget: it’s the scent of springtime, which invades me as I bathe under the shower that’s warmed by an alcohol burner, and sing Bing and Frankie tunes while getting ready to go to a party. I’m a klutzy dancer, but I dance till I drop. I have fleeting romances whose greatest attraction consists of describing them to Rosario on the phone.
But no, that came later, much later: right now I’m one of those girls who wear cotton anklets and low-heeled shoes and stare at Ana Cristina’s silk stockings and high heels out of the corner of their eyes. I go back and forth, whirling between lessons, recess bells, and B-plus grade point averages. My mind is full of holes where knowledge ought to be. I focus on Señorita Granate’s tits as she recites Alfonsina Storni’s verses for us in Literature class. Granate must have her bras made to order at the Venerable House of Porta. Another thing I’ll never forget is the day when Señorita Granate, who taught us algebra in senior year, came to class with a black eye. Matilde hid behind the abnormally large head of a student who enrolled in the school on the Minister’s recommendation.
“God punished her,” Matilde whispered, choking on her own laughter. “God punishes...”