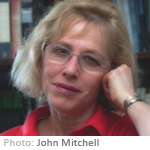 Carol Lipszyc's book of lyrical and autobiographical poems, Singing Me Home, was published by Inanna Press, York University, 2010. Stories on children in the Shoah from the collection, Saviour Shoes and Other Stories, have appeared in Midstream and Parchment. As an educator and scholar, Carol has published in international journals in Australia, New Zealand, Canada and the U.K. Her Literacy/ESL Reader with chants, People Express, was published by Oxford University Press, Toronto, 1996. Carol is currently an Assistant Professor at State University of New York, Plattsburgh teaching English teacher education and creative writing.