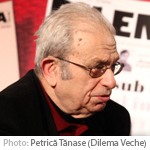 Translated from Rumanian by Jean Harris