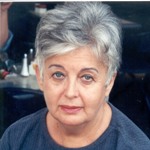 (Excerpt from a Fictional Correspondence)

Translated from Serbian by Maya Shlivic