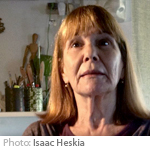 Translated from Hebrew by Binyamin Shalom