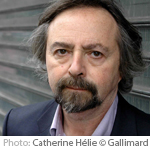 Translated from French by Robert Bononno