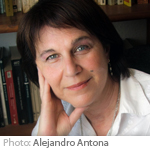 Andrea G. Labinger (the translator) has published numerous translations of Latin American fiction. She has been a finalist three times in the PEN USA competition. Recent titles include Ángela Pradelli’s Friends of Mine (Latin American Literary Review Press, 2012) and Ana María Shua’s The Weight of Temptation (Nebraska, 2012). Her translation of Liliana Heker’s The End of the Story (Biblioasis, 2012) was included in World Literature Today’s list of the “75 Notable Translations of the Year.” In 2014 Wings Press will publish her translation of Alicia Kozameh’s Eni Furtado Has Never Stopped Running.