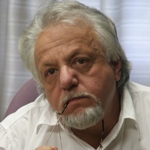 Translated from Russian by Norman Kass and Edward Razinsky